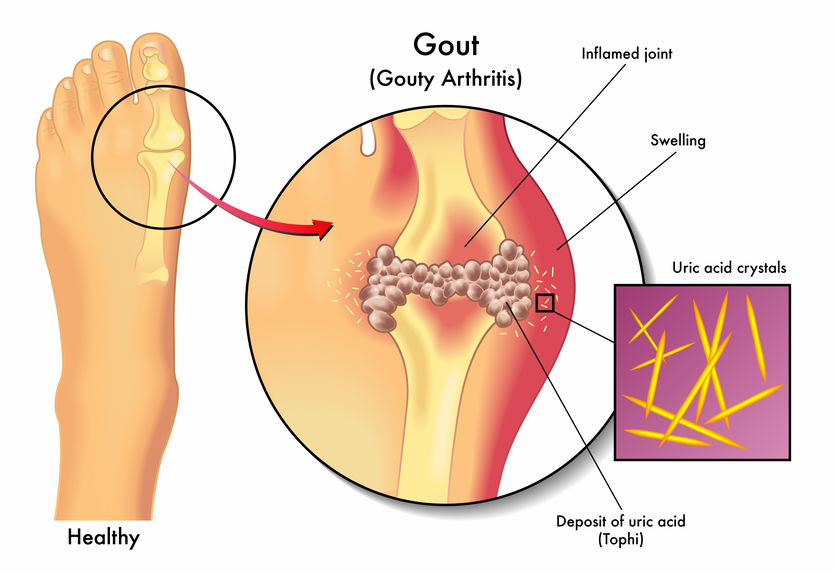 Approximately 4 percent of the US population suffers from gout, which is almost 10 million people. This statistic rises to 20 percent in patients with a family history of the condition. Given the widespread prevalence of gout, pharmacy technicians must be familiar with the common antigout drugs used to treat this condition.

Gout is a form of inflammatory arthritis that affects the joints. It is typically very painful and often affects only one joint at a time – often the toes, ankle, or knees. There are two phases:

Whilst there is no cure for the condition, it is treatable. A wide variety of drugs exist to tackle both the pain and the inflammation that patients experience. Flares can start suddenly or develop over days. In fact, periods of remission can last up to years, but may last only a few weeks or months.

Symptoms of gout include:

The cause of gout is the build-up of uric acid in joints, what is referred to as hyperuricemia. Food, when broken down, produces purines. These purines are metabolized into uric acid. Too much uric acid in the body can crystallize in the joints, causing inflammation and pain. However, it is important to note that hyperuricemia is not the same as gout. It is possible for patients to have high uric acid levels but who do not develop gout.

Factors that increase the risk of developing gout include:

Gout can be managed through preventative measures.

This includes improving diet and exercise, as well as reducing purine-rich food consumption. Losing weight can drastically reduce the rate of flare-ups.

When flare-ups do occur, patients can be advised to apply ice packs to the affected area several times a day, thereby reducing pain and discomfort.

For the PTCB test, candidates should know the major drugs used to both treat and prevent acute attacks of gout.

NSAIDs (non-steroidal anti-inflammatory drugs) are often used to treat symptoms – examples of which include ibuprofen and indomethacin. Given that NSAIDs can cause gastrointestinal side effects, susceptible patients may also be prescribed a proton-pump inhibitor. Glucocorticoids are also effective at treating the inflammation caused by gout and are most effective when injected directly into the joint. Patients who are unable to tolerate the effects of NSAIDs may be prescribed colchicine.

Here, we have put these must-know facts into the table below – alongside some of the most common brand names and the mechanism of action of each drug.

Note that some antigout drugs – notably allopurinol and rasburicase – are used as part of a treatment regimen for patients with certain cancers. That’s because uric acid levels can rise in cancer patients undergoing chemotherapy – with tumors breaking down to generate high levels of uric acid (among other breakdown products). This is known as tumor lysis syndrome.

Gout affects millions of patients throughout the United States.

As a pharmacy technician, you will be processing many prescriptions with antigout drugs – and you must be able to recognize these drugs and understand the condition and what the patient is reporting. Here, in this rapid revision PTCB study guide to gout, we have covered the detail that technicians are expected to know.

By committing these facts to memory, there is no reason why you cannot ace any PTCB test question on this widely examined topic.

Found this helpful? Master the PTCB exam and every other drug class with our self-paced online course. Also, check back to our PTCB blog soon for more exclusive content to help you become a qualified pharmacy technician!

3 Pharmacy Laws to Know for the PTCB Exam!

Top 50 Medicines and Side Effects!